Error in SUBNM when displaying descendants of a consolidation node

I have got the error: Error: [$rootScope:infdig] 10 $digest() iterations reached. Aborting! in the tm1-ui-subnm component when using an MDX that displays all the descendants of a root consolidation node ( for example: {DESCENDANTS([FIN Cost Center].[Management Hierarchy (LOB)])} ).

The hierarchy is very deep and it might be the problem. This issue does not happen when displaying all the descendants of a consolidation node with less levels.

Is there a way to fix this issue?

Thank you in advance.

That usually happens if there are other changes happening on the same directive and has been looping through these changes for quite some time (probably back and forth with the changes).

I created a blank page with only the SUBNM. Nothing is happening on the controller side. No attributes passed into that SUBNM:

The error is still happening:

On the consolidation node used, there are 12 levels: 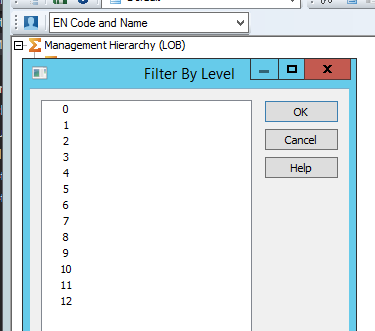 That seems to be an internal limit within the underlying AngularJS library framework on rendering the same html templates recursively. Due to the nature of the hierarchy, HTML templates are being re-used to render each sub level.

I was able to re-create it and though there was an error in the console with a 12 level deep consolidation, I was still able to see the resulting hierarchy: 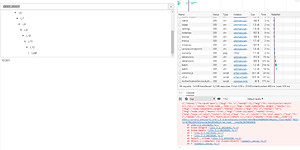 I was still also able to select the other elements though.

Was it the same for you?

Given the descriptions of these elements could be quite long, one alternative way is to probably split it into two sections if that is an option.

Hope this helps clarify the above.

Thank you for your help.

Despite the error, the hierarchy is still displayed correctly in the SUBNM. If this issue was only happening at the initialization of the page, that would not be a problem, but it happens each time a new selection is made in the SUBNM and therefore there is an impact on the performance, and the dashboard takes longer to render properly.

Thank you again for investigating. I will check your suggestion and see if it is acceptable for the users.