I have a instance where the following entries show up in the Extend log in the user directory. Any idea what the entries mean ?

Which version of Extend is this?

Latest version that I found in the Dropbox.

Thanks for pointing that out. It was used for debugging purposes for a client a long time ago.

The version that should be used officially would be the one posted here instead:

I have left the ini file as the default settings

Those were due to logos that were not set within the CWXtndFormats.xla file.

You can ignore them if you want to. Otherwise, you can further customize the look and feel of the resulting Slice and Active Form action from cube to Excel via the above XLA file which will be generated on the user’s profile folder.

To have a go at it, you can start by going into Excel’s VBA Editor (Alt+F11). Look and click the “ThisWorkbook” after expanding CWXtndFormats.xla file: 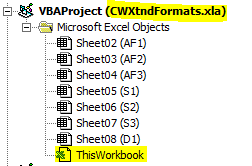 Search for the IsAddin property and set it to False.

After you do that, the above workbook will now be temporarily visible. and you will see the following at the bottom:

The logs above were due to an image named as “picLogo” not inserted / added into that worksheet.

ApplySliceFormats is for the logo not being found for Slice action, ApplyAFFormats for Active Form action.

You can also customize the other designated parts in there like the table fonts, background colours among other things.

And in terms of sheets, there will be 3 sheets related to each type of action:

Which refers to the type of style you would like to apply. And these can be changed from Extend’s Options here:

After you are done, save your changes for the CWXtndFormats file and either set back the IsAddin flag to true, or you can just close Excel. The next time you open Excel, the formats file will be automatically be hidden again.