I am busy creating a dashboard but it is not showing any of my values when using alternative hierarchy in my rows that is shown in the cube and in Apliqo view. If I load any data on the Dashboard it is loaded against whatever is shown in the filter and not against the element I am loading it against.

Dashboard with Alternative Hierarchy as rows 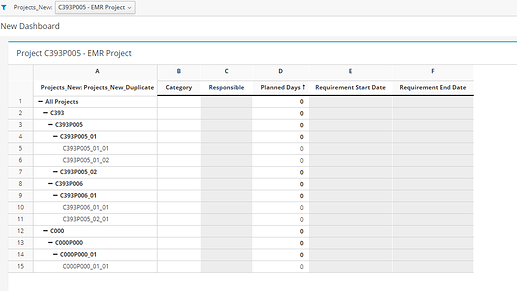 Dashboard with just the 2 Dimensions in 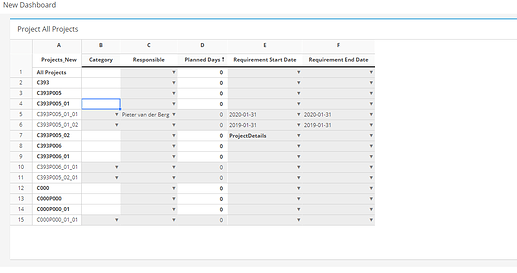 Before I upgraded to 2.5 I did have the dashboard working, I missed this one model when I was backing up my content stores for the upgrade, so cleared out the previous content store, replace with the Demo one and cleaned it up to start building it from scratch.

I missed this one model when I was backing up my content stores for the upgrade, so cleared out the previous content store, replace with the Demo one and cleaned it up to start building it from scratch.

Sorry not quite related to your question, but why did you do this? There’s no need to be rebuilding anything. When upgrading versions it is really simple and straightforward to upgrade the ContentStore, either with the online Pulse package or the offline package. Neither will overwrite any apps or cause any loss of data.

As to your question it’s an interesting one. With hierarchies each hierarchy can be used once and only once in a view. But if you have added multiple hierarches of a dimension on a dashboard then of course Apliqo UX will try and use them in the MDX view so if you have element C393P005 from hierarcy “ABC” on filter then this will be in the WHERE whereas the other hierarchy “XYZ” will be ON ROWS and the query will be retrieving the intersection (which doesn’t contain data in this case).

There are a couple of workarounds I can think of to your issue:

Ultimately we might need to make views and dashboards a little more complicated by adding the ability to “ignore” title dimensions when building MDX which I think is the proper solution to your problem. But for now the workaround woudl be to use a helper dimension.

Thanks I did start using a duplicate Dimension to work with data. I realised this morning that I haven’t focused on data. Will keep using it with the “helper” dimension.

I did the upgrade of the Demo ApliqoCC I have right, but my "pet project’ I messed up. It is not massive issue, I have been breaking it for the last 3 months and rebuilding the TM1 side of it.

Thanks for the help